Over the weekend, I visited the beautiful city of San Francisco. My best friend lives there and I decided to drive up and spend a few nights at her apartment in the city. I am always blown away by how beautiful San Francisco is there coast is super beautiful. I loved watching the waves come Read More 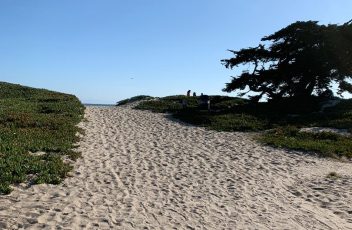 Today I visited Ventura Harbor where I spent some time, along with many others, cleaning up the beach. As I walked up and down Ventura Beach, I found plenty of trash to pick up. Even walking to the beach we picked up some cigarette butts lying in planters or even in the gutter. There were many other people on the beach collecting trash which felt really good and it felt I was apart of something bigger. We hear so much about the litter and trash along beaches and in the ocean, and it does feel accomplishing to be able to do something about it (even if it’s as simple as walking along the beach, collecting trash.) As we walked around, I noticed that as I started collecting it was hard to stop. The more I collected – the better I became at spotting trash that was mixed in with the sand.

As I was at the beach, I thought about our Beach class and all that I’ve been learning. There was so much that I’ve learned since that now resonates with me as I walk around the beach and look at all the different aspects to it. I noticed a jetty a few feet away from where we were, and if it weren’t for this class I probably wouldn’t have noticed it. I also noticed the different kinds of sand along the beach, and as we walked closer to the water I noticed the erosion happening. As the waves came and went from the shoreline, I noticed how much sand was being stripped away from the beach. A little deeper in the water, there were so many rocks and not much sand. We’ve been learning so much about erosion and the problems that are being associated with it, and it makes me wonder what beaches will be like in 20, 40, or even 50 years. Thinking about sea level rise, it makes me wonder if we will even have beaches at all. These are all aspects to the beach that wouldn’t have crossed my mind if it weren’t for this class.