I recently went on a day trip driving up the 1 to Big sur and it was one of the most beautiful places I’ve ever seen. Our first stop when we arrived was Mcway Falls at Julia Burns State Park which is a waterfall that falls straight onto the sand. According to the ranger  it is one of the two waterfalls that fall directly into the ocean here in California. The waterfall is actually closed off to the public which I think adds to the beauty of it since people can’t ruin it. Another cool thing about the waterfall is that it is surrounded by pine trees which you do not usually see around beaches. The pine trees line up by the beaches up the entire coast and it is one of the most beautiful things I have ever seen. Another place we stopped at was Pfeiffer State Beach which we found by accident after taking a wrong turn and not being able to turn around since it’s a narrow road the entire way to the beach. The first thing I noticed when we arrived at the beach was these giant rocks in the ocean. The biggest one was really cool because it has a hole through the middle where waves crash through.(Picture included because I can not describe how cool it is) This second thing I noticed was the purple sand which you could see after some digging. When we went it was close to sunset so the sand looked like a mix of lavender and pink which was so beautiful to see. I learned that the purple color actually comes from the surrounding rocks that have manganese garnet deposits. The last beach we stopped at was point lobos national reserve. This beach is really cool because one side of it is like a forest where you can hike through and the other side is rocky cliffs and ocean. There is also a lot of wildlife here such as sea otters and sea lions hanging out on the beach. Overall it was a really amazing trip and I would highly recommend that everyone should take the time to visit Big Sur because it is such an incredible place and we are so close to it. 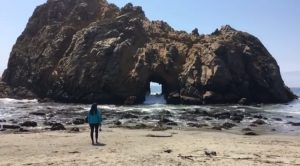 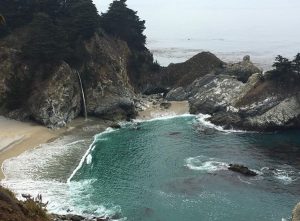