On September 11th I visited Broad Beach with some fellow Environmental Science students and our professor. As we gathered to learn the day’s lessons, I observed the beach–or lack thereof. We gathered originally on Zuma beach and here we saw expanses of typical California sandy beach; a good stretch of warm, dry sand and clear skies above being greeted by the cool Pacific Ocean. The beach was heavily populated with beach-goers utilizing the beach for recreational and relaxing reasons. Not far up the beach, coastal armoring had been added to protect the multi-million dollar homes from coastal erosion. Riprap, or the large boulders and cobbles strategically guarding infrastructure, is only one form of coastal armoring, however the impacts are visually jarring. Within half a mile the sandy beach had given way to ocean waves bombarding the wall of rocks. Our tour ended at the southernmost tip of Broad Beach, as there was no dry beach to walk along.

These conditions were surprising to me. I have previously come across coastal armoring before, in fact one of my family’s most b 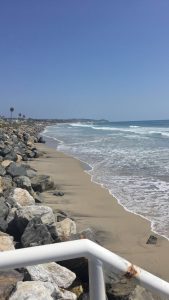 eloved campsites is Rincon, which is only supported due to the riprap lining the shores; however through my new understanding of the fragility of beach ecosystems and the issues surrounding public beach access my views have changed. I have countless memories of clamoring on the boulders and sunbathing on their flat surfaces, however these nostalgic times do not represent the needs to reevaluate  our coastal management.

In the case of Broad Beach, coastal armoring is not the only anthropogenic impact challenging the ecosystem, however I would argue it is the most apparent.

Utilizing riprap to protect private property reduces the ability for public beach-goers to access what is rightfully theirs. Setting a hard, static structure in a dynamic ecosystem threatens the overall stability and utility of the system; this is exemplified by the limited sandy beach available to the public on Broad Beach. To access the beach from the street you can utilize the designated public access paths, typically signified by “inviting” chain-linked fences and gates that may not function appropriately. To access the beach from a lateral standpoint you risk twisting an ankle or tripping on the slimy rocks that effectively create a social line between private and public. To me this is not beach access; in fact there is very little beach to access due to protective rocky armoring.