It was Coastal Cleanup Day so there were many people from all age groups here at this beach. I think a big reason why people came out on this particular day was for recognition and incentive. Many people showed up through organizations or schools. For example, some of the groups that came were REI staff, Channel Islands students, and girl scouts. Some of these groups probably had to take part for community hours, or even want to go because they wanted recognition for going. Some people like the incentive to go to these things even though we should always be picking up some trash when we go to the beach. The incentives that I noticed were free snacks, free shirts, and free day passes to any park of your choice. The big prize at the end of staying was a basket of goodies including a REI backpack. This shows the culture of people and how others can be motivated. 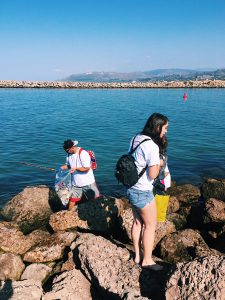 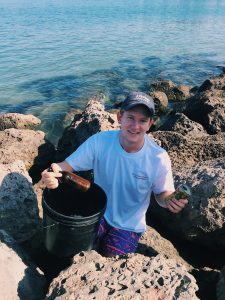 The goal of the day was to pick up anything that wasn’t natural to the beach environmental like trash but nothing organic. My group and I recovered many large glass bottles, fishing line, and even a fishing hook. I also noticed quite a few areas with wrack, washed up kelp. We recovered these items along the shore by the rocks. We figured people would be walking along the beach because of its easier access so we decided to go the harder route and climb the jagged rocks! I believe because how easy and secluded these rock areas were, we could find many bottles and cans from alcoholic beverages. Most of these items were still enacted and not yet broken into a microplastic, which is good because we stopped it in its tracks! If it did turn into a microplastic it then would have been ingested and gone up the trophic levels. This beach is located right at the harbor where many tourism activities occur and take place constantly. This could really have an effect on the trash buildup and the erosion. Those are the two main things I noticed at this location. 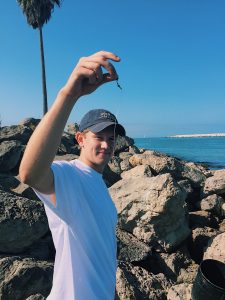 ade me realize that many people aren’t informed about this situation of trash buildup we have because so many of the volunteer’s faces were shocked when they weighed their trash and realized they just collected 7 pounds of it! Sure, we can read about issues occurring but when someone goes out and has a first-hand experience with it they become connected. So, after today I am hoping some of the volunteers will go home with a different look on how we take care of the beach and how they can do their part.