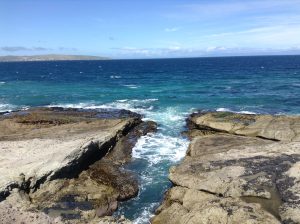 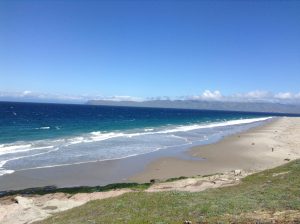 A while back I was able to go to the vast Channel Islands and go to the very place our school is named after. I went for a class trip for ESRM 328, GIS (Geographic Information System). I was able to go to specifically Santa Rosa Island, and it wasn’t the first time. The first time I was able to go was for ESRM 200, Principles of Resource Management, and for that class we looked at how the research station was run and the ranch history. Something I found very interesting when I first visited was the boiler they used to boil and get rid of all the sheep, which was brutal. But beyond that I was able to experience the island and get a feel of it through a more educational perspective.

For this experience I was able to apply my GIS skills in real life. Since this was my second time on the island I was more prepared than I was my first trip. However, instead of being arid and dry, the weather this time was way more sporadic, there was rain, there was shine, and there was even thunder and lightning which I was not prepared for at all. I never felt so at peace with myself until it was a group of us at the pier while it was pouring, while at the same time just listening to the thunder. At the time we didn’t think of it much, but now that I look back at it that was dangerous. Seeing the coast, the next morning and smelling the coarse salt air was euphoric. Climbing down the later to the beach almost became impossible to resist.

For this trip, a group of us got to choose a trail to do, and I was able to do Torrey Pines. Torrey Pines are endemic to San Diego and the Channel Islands, so getting to see them both from my hometown and over there made me realize how important species preservation is. I also learned that as we continue to use the island for research we enhance ways and practices to bring back to the mainland. The pictures were from on our way back collecting picture references of species vegetation over time. We used our mapping skills to allow us to use references given and be able to take the perfect pictures that correlated with the ones from the past. This beach gave us a sense of completion and appreciation for beaches that have never been truly impacted by people.

Being able to take these trips and opportunities in class gave me a newfound appreciation for my major. I got to apply real life skills that I can utilize later in life and aid me in my future career. Without this trip I probably would’ve had less pride for the school I go to. My main take away is that it’s always important to take opportunities given, because you never know where you’ll end up going.