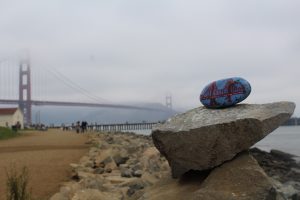 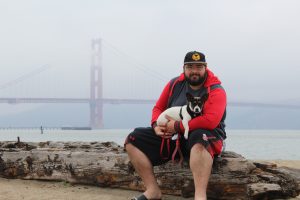 For my beach I went to Crissy Field out by San Francisco. I went there because not only is it dog friendly, I was also visiting my hometown in Northern California in the Bay Area. My scope of focus is going to be business. I chose business because to me that stuck out the most to me while I was visiting there. While it was also dog friendly, it was also very active, touristy, and a lot of many other activities to do other than just sit at the beach. While there was only one shop and one diner close to where I parked, there was still a lot of business going on in that one shop. When I went in the shop, I noticed there was over twenty people in this little shop running around trying to buy souvenirs, and while I went to the diner to get water for my dogs, I noticed there was over fifty people standing in line ordering food, waiting on their food, or just enjoying the atmosphere of the little diner. While I was walking around the beach I noticed that most of the people also walking around or picnicking, a lot of people where foreigners, while some were locals to the area, you can tell the difference in the clothing style. There were also photographers on a dock nearby since it had a spectacular view of the Golden Gate Bridge, which is the iconic bridge of San Francisco. It got me curious so I asked one of the photographers how much did he charge and he said it was $5 a picture and when I asked him roughly how much he made a day he told me on a good day he makes $750 just to take pictures, which means he makes $5,250 a week just taking pictures of foreigners and locals with the Golden Gate as his backdrop. He then goes on to tell me that he gets really good business when it is the summer season and not that much good business when it is the fall and winter season yet he still pulls roughly about $300 a day on his slow seasons. With that in mind, business is very good in Crissy Field between the one diner, the one shop, and the many photographers sharing the wealth between the locals and the foreigners alike.