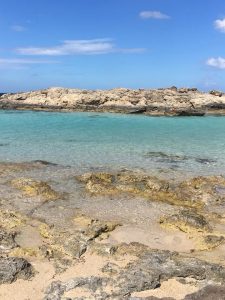 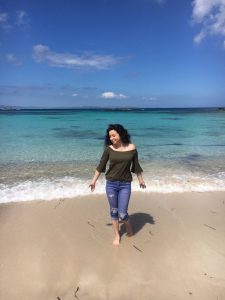 Since the semester has taken off and a trip to the beach is no longer an option with only five weeks left for the semester to be over, I thought I could focus my third blog post by reminiscing on happier times. This past academic school year I had the privilege of studying abroad in Madrid, Spain and in my time abroad I traveled to various countries but the location that sticks in my head is Formentera, a beautiful island off the coast of Ibiza, Spain. Formentera is one of the four Balearic Islands located east of the Spanish mainland. I was lucky enough to visit three of the four which include; Ibiza, Formentera, Palma Mallorca and the one I was unable to go to Menorca. The only way to get to the island is by taking a boat and very nauseating trip from the coast of Ibiza to Formentera. Thankfully Formentera is only populated with a little over 10,000 people. The island contains many beaches that are very much untouched with clear blue waters and white sand beaches. Many of these beaches are open to the public, in addition they are paths alongside the road where people can ride bikes and Vespas to get around. 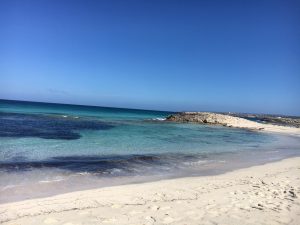 My friend and I decided to rent a bike for the day (the rental of the bike is also extremely cheap 8$ for the whole day). Through this method of transportation we circled the island and visited various beaches but the one that stood out the most was this one with the clearest water and the sand that looked almost to be untouched. Although there was some coloration in the rocks there was no algae in the shore. The landscape was a combination of rocks that have been formed and shaped by the water as well as a white sandy beach. The ocean that surrounds the island is the Mediterranean Sea and with the warm water and weather it is easy to enjoy a day at the beach. Since we went in the beginning of April the islands where off season which means the level of tourism was a lot less than in the summer. I did view the beach with touristic lens enjoying the view and calm waters, through the bike ride we got very sunburned and got very sore after a day of biking through an island and then trying to catch our flight back to Madrid.

If anyone ever finds themselves in Spain and would like a time away from the city I strongly recommend visiting the Balearic Islands. They are not only an inexpensive and easy travel but a beautiful view and change in scenery from our California sandy beach. 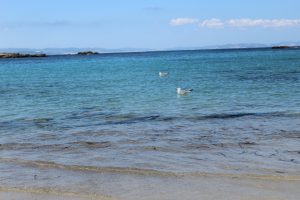