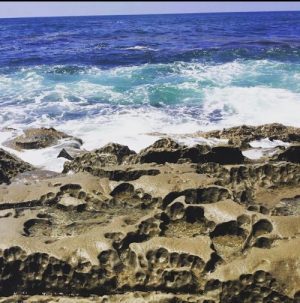 There are very few places I’ve visited that have completely taken my breath away. One of those places was La Jolla Beach and Tide Pools in San Diego County. There was something about its sheer beauty and serenity that left me breathless, especially, because I wasn’t expecting it. My friends and I just so happened to stop here on our way to San Diego for a concert. I’ve been to plenty of “nice” beaches but, nothing has measured up to this jewel.

The San Diego area is better known for long sandy beaches, however, La Jolla is unique in the fact that it’s shoreline is rugged and its beaches are short and secluded. What’s also unique about this area is there are several small caves along the shore, as well as tide pools that become completely exposed during low tide. It just so happened to be low tide when I first visited.

Typically, you would find little critters blending into the rock such as crabs and starfish, however, I didn’t spot any on the day that I went – at least that I could see. Nevertheless, it was pretty cool to see the exposed rock and watch as the waves began slowly crashing their way back in. These little grooves were empty of sea life, although, I did find a few shells some crabs had shed. There is a fairly large population of seals that like to swim, eat, and rest near the cove just to the right of this area.

La Jolla beach is uniquely protected by a rocky point which blocks waves rolling in from the west most of the time and creates a safe swimming beach. Since it is north-facing, usually there are shaded areas at the back of the beach. This makes it pretty popular during the summer but it’s a small area so not a lot of people can fit here.

The geology and geography of this area is unlike any other beaches I’ve been to. Unfortunately, I didn’t get to spend a lot of time there and wish I could have done more exploring in the tide pools or had checked out some of the caves. I definitely plan on going back and doing much more. Interestingly enough, I may have to do this quite soon as recent studies predict this area will completely erode within the next 50 years.