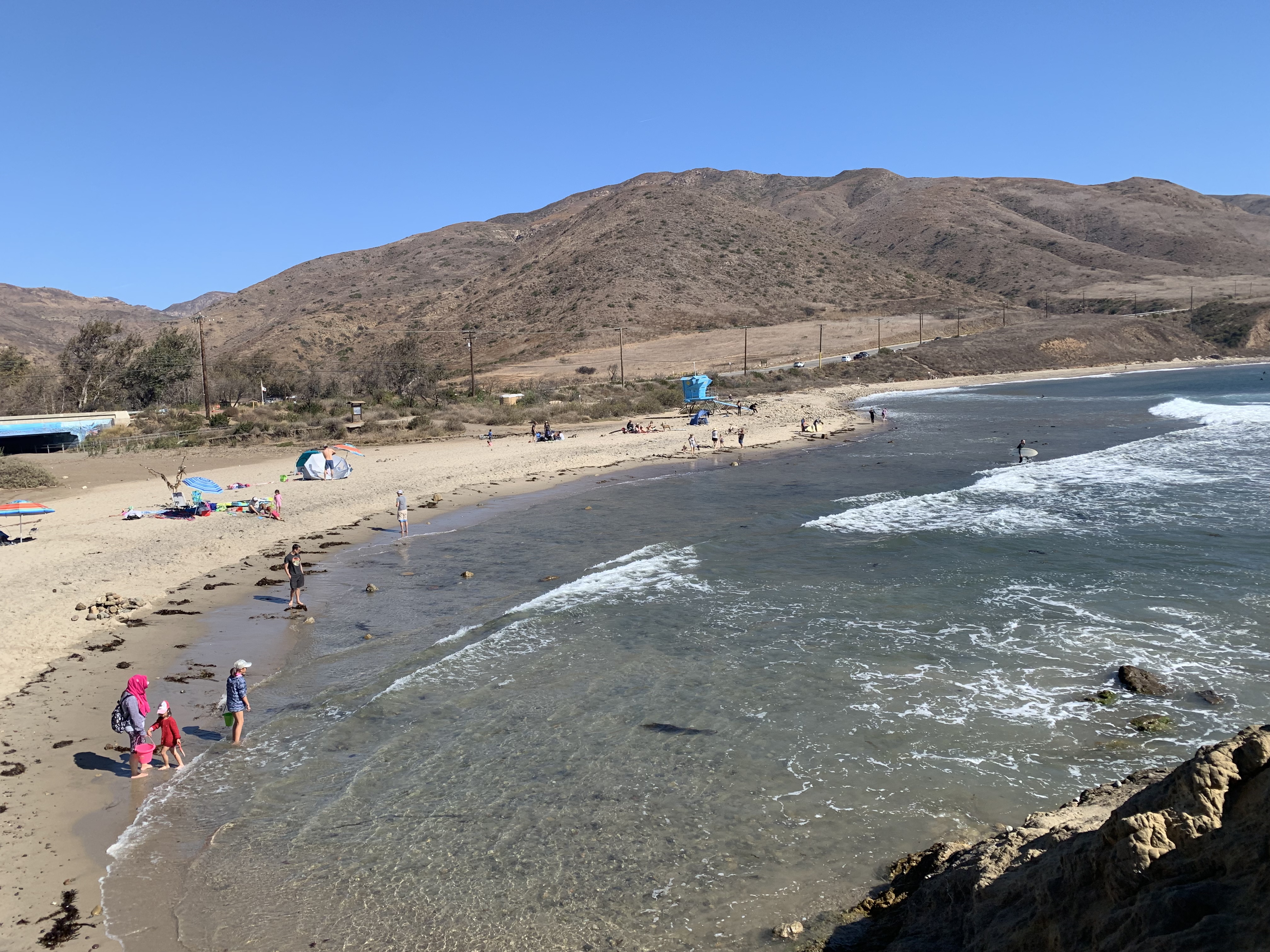 Last Sunday, my dad and I went to Leo Carrillo Beach. Although I had never been before, my dad was excited to show me the beach’s famous tide pools and rock formations. So, at 10 o’clock on Sunday morning we set out for the beach. After driving along the 1 freeway for a while, and learning we drove past our destination, we flipped a u-turn and found our way to the Leo Carrillo campground. After paying for parking, we set off for the beach.

Passing under the freeway and through a mural-laden walkway, we arrived on the beach to find it bustling with people. We immediately made our way to the right side of the beach, towards several large rock structures teeming with climbers. After taking off our sandals, we shortly joined them, and began moving upward.

Once we reached the top, the whole beach was lain out before us, full of life and energy. After posing for some pictures ourselves, we vaulted over the rocks and headed for the other side.

The other side of the rock formation was much quieter, and the beach itself much narrower. This side, at least according to me dad, was usually where tide pools would usually form, and rocky caves were exposed. However, that Sunday the tide was fairly high, and most of the tide pools and caves were inaccessible unless we wanted to be completely drenched and wave-battered. Though disappointed, we did not let it get to us, and continued exploring the beach.

While we did not get to see the caves and tide pools we originally intended to, what we did see as we walked along the beach was people enjoying the beach in a variety of ways. On the sandy beach shore, families were playing with young children, lounging or enjoying themselves in the shallow surf. On the rock formation we had climbed over, older more adventurous groups were scaling the nearby cliffs, while children at the bottom begged their parents to let them climb. Amidst the rocks, a few pet owners played fetch with their dogs (in sharp, but well-accepted defiance of a “no dogs” sign we had passed earlier), while others combed through the same scattered rocks with a metal detectors. Further out, surfers rode among the waves.

Meanwhile, my dad and I set out rock-collecting along the beach. There, we held our usual contest to see who could find the best and coolest rock, a somewhat lame but undeniably enjoyable competition. Since I was more willing then him to venture into the surf to find rocks and shells, I ended up winning with a very strong collection, and a few really good finds.

Although our original plans for Leo Carrillo were somewhat soiled by high tide, we found plenty of other ways to occupy our time on the beach. In fact, what struck me most about our visit to Leo Carrillo was how many different ways people found to use the beach. For some it was a chance to relax with their families or pets, for others it was a chance for physical activities like climbing or surfing, and for others it was a chance to collect either shells or metal keepsakes others had left behind. Besides their economic and ecological importance, Leo Carrillo reminded me of the importance beaches can have to Californians as well.

No two people visiting a beach at one day may be there for the same reason, yet everyone there is having a good time among the presence of others. Despite our different goals and backgrounds, everyone there had something in common: a love and appreciation for the beach. California, is at its heart, is a beach community, one with a deep a varied relationship toward our shoreline. My visit to Leo Carrillo showed me that, even if the beach means something different to each of us, it is an important part of our culture and our home, and its thus important for us to protect and share it.