This semester I was blessed with the opportunity to visit Santa Rosa Island with the school. I traveled to SRI research station with my land use management class lead by Dr.  Dan Reineman. This was not my first visit to Santa Rosa Island nor will it be my last, but on this particular trip it was my first time visiting the shores at the end of Lobo Canyon, north shore of the island. From what we’ve learned in this class is that not all coastlines are sandy beaches. At the end of the canyon lies a stretch of rocky coastline with pocket coves that contained tiny sandy beaches. Although this stretch of coastline is not as lush as the eastern portion of the island near the pier, the beauty of this stretch is unmatched. After a rigorous hike we stumbled upon this gem that revealed a peak into ancient history. Ancient? You might ask. What I had noticed was a clue to an ancient civilization, the Chumash nation. What I had stumbled upon was an impressive stack of shell midden, for those of you unaware shell midden is stacks of natural trash, usually from discarded sea shells. The shell midden was being revealed more as the coast began to erode into the sea. Viewing this made me think about this time period, a period of rich seas filled with food that a civilization relied on for millennia. To me, I saw a period of good eatin’. Although our break at the north facing coastline was relatively short lived in comparison to the 8 hour long hike itself it was truly rewarding finding the light at the end of the tunnel, or water at the end of the canyon this case. After discovering this stretch, I definitely wish to further explore the region of the island and the mysteries waiting to be found. If any of you get the privilege to visit the SRI research station, consider making the trek down Lobo Canyon, the reward is more than worth the hike. Extra brownie points if you find and identify the shell midden eroding into the sea. 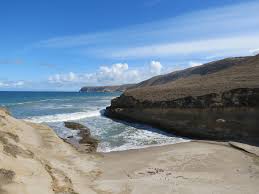 One thought on “Lobo Canyon”