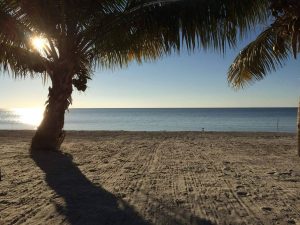 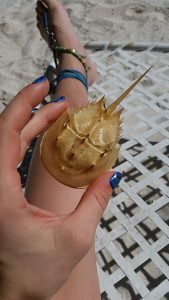 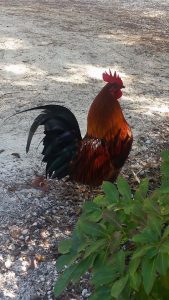 I had a chance to visit the Marathon Key in the Florida Keys and never thought going to east coast beaches would be much different than the sandy west coast beaches that I am accustomed to. I always figured that all beaches were fairly similar. I never took into account that each beach is determined by what type of climate it is apart of. When walking into the water, it was very shallow for quite a ways. The water was warm, like bath water, very unlike our Southern California beaches. We have our warm days, but most of the time our waters are a bit chillier. The water was much clearer than water here on the west coast. I could see my feet no matter how deep I walked in. The beaches in Southern California have multiple colors that make it up, black, pink, white, brown, tan, etc. Many different sizes of sand from silt to very coarse sand can be found at even one beach. I usually notice maybe some driftwood wash up, rocks, and maybe some dune plants intermixed within the beach. The beach in the Florida Keys that I visited was mostly very light tan and the sand was incredibly small and soft, nothing larger than fine sand. There were no large pieces mixed in except for remnants of horseshoe crabs among other local crustaceans. The remnants and shells that I could find along the Marathon beach were all surprisingly enough, whole. If I could make jewelry, I could collect a few to make some if I wanted to. West coast shells tend to be more broken up and weathered. Some have been broken up and weathered down so much that I can never tell what species it came from. The beach in Marathon was very wide and flat with the palm trees right on the beach. It was a private beach, so it was incredibly quiet. No humans to be found around, not even the animals ventured through, except for the random, confused looking chicken every now and then that would strut through. Very unlike the west coast beaches that are full of locals and tourists alike sharing the space to enjoy it for many different kinds of recreation. I feel as though we have such a larger variety and number of species on the west coast beaches, though. Birds, especially, are up and down the west coastline hunting, pecking, and diving for food. These shorebirds are mostly pelicans, seagulls, turns, sandpipers, and snowy plovers. Not just birds, but other types of animal life is very different as well. Perhaps due to the humidity, which felt like a warm blanket swaddling my lungs and almost choking my breath, there were a lot of mosquitos and bugs. The insect life seemed to be flourishing everywhere in Marathon. I do not think I have ever noticed the insects on the west coast unless they intruded into my home. I have never really noticed the insects on our beaches though, other than some isopods and ants. It was such a wake-up call to realize that beaches were not just palm trees, sand, sun, and water alike; rather, they are individual ecosystems dependant on all manner of biotic and abiotic factors, and mostly human activity and location.