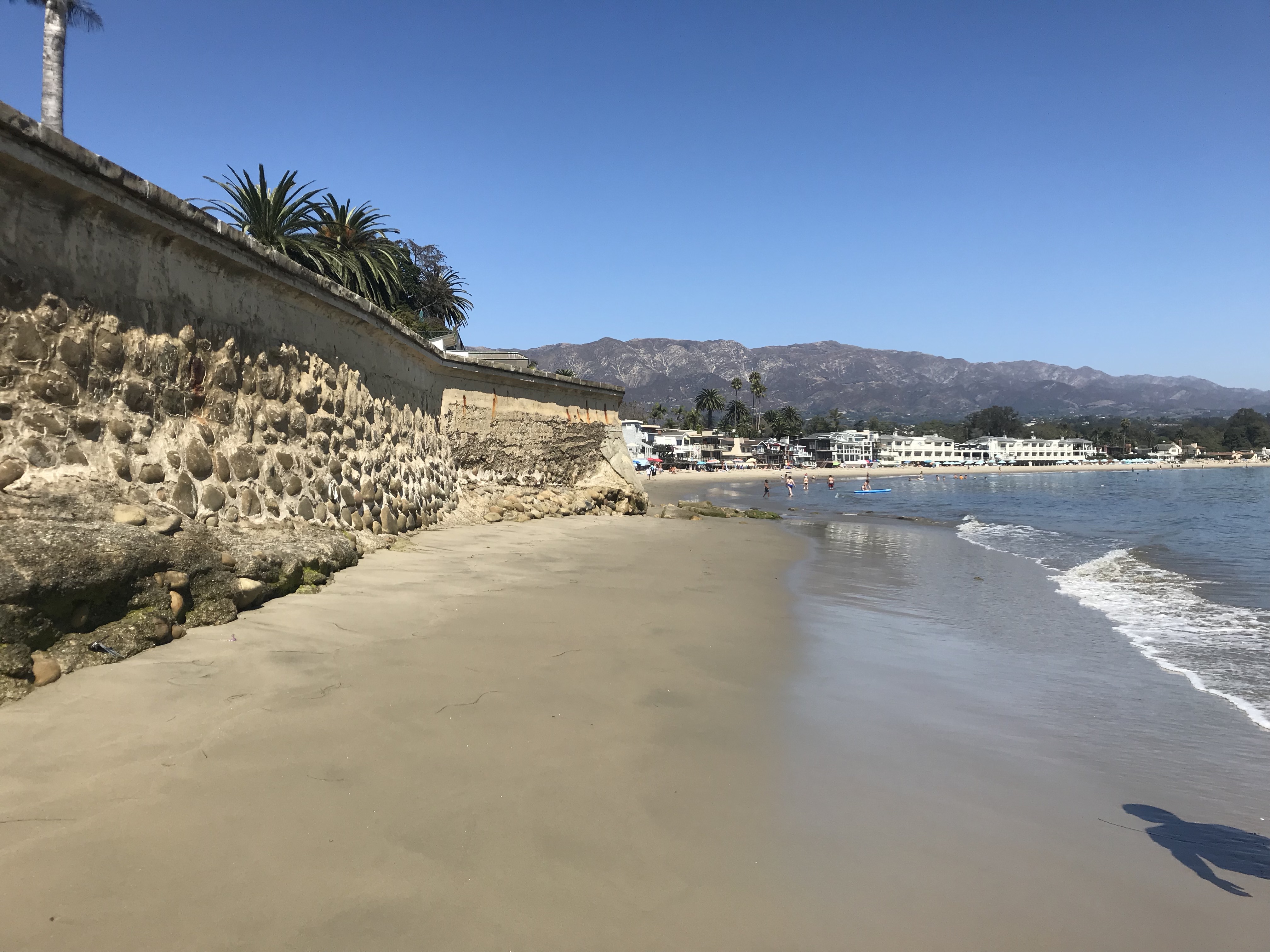 When I took pictures of Miramar Beach, it was with the intent to show an example of the close proximity in which structures are built to the ocean and to discuss environmental concerns of the coastal armoring that is put in place to protect such structures. I decided to go a different route for this blog for two reasons. First, I already blogged about the Coastal Cleanup through an environmental lens, so I need to write from a different perspective. Second, when I was searching for information about coastal armoring at Miramar Beach, I instead found articles about the conflict between the Rosewood Miramar Beach and the public regarding beach access. So, this blog will discuss the politics and laws of beach access and coastal armoring.

As we learned in our Beach class and by watching “Coastal Clash,” there is a clash between coastal private property owners and the public when it comes to beach access. According to “Coastal Clash” and noozhawk.com, the California Coastal Act states that the public has access to beaches below the mean high tide line. However, when a family went to celebrate a 6thgrade promotion ceremony below Miramar beach’s high tide line and planned on getting snacks from the hotel, they were met by the hotel’s security guards who told them to leave. This controversial confrontation got the attention of the Coastal Commission, who threatened the Rosewood Miramar Beach to either “remove all stanchions, ropes and other beach obstructions, or face a formal cease-and-desist order and hefty fines of up to $30,000 a day” (https://www.noozhawk.com/article/rosewood_miramar_resort_ordered_open_beach_access_to_public_20190622). The hotel insists that they welcome public use of Miramar Beach and has replaced the stanchions surrounding their beach seats with subtler ropes to “outline the alcohol service area, which is required by its liquor license permit.” Additionally, “Public Welcomed” signs have been added around the hotel’s beach area. This seems like a sensible compromise that meets the hotel’s licensing agreements in a more welcoming, inclusive way. Hopefully their security guards no longer intimidate the public to leave the beach.

A similar clash exists between home owners and the public when it comes to coastal armoring. Owners of these beautiful, wildly expensive beach-front properties pay for armoring in hopes of saving their properties from the rising sea and destructive waves. This comes at the price of beach loss, as the rock walls continuously diminish the amount of sand in front of them. This means that these wealthy property owners get to decide to save their homes at the expense of the beach in front of it. These decisions of the few determine a fate that affects the many public beach goers.

Should those few have the right to make a decision that affects so many other people and creatures? According to UCSB’s website Explore Beaches, the California Coastal Commission approves all armoring projects. They protect existing coastal developments or developments that must be built on the coast, but their main goal is to protect the coast and try to minimize the impact coastal development has on coastal resources. So, in efforts to better protect beaches, the Commission recently added “a ‘no future seawall’ provision to many coastal development permits. This requires the property owner to waive future rights to any shoreline protection” (http://explorebeaches.msi.ucsb.edu/beach-health/coastal-armoring). I’m curious about why the Commission is adding this provision to “many” of the coastal development permits instead of all of them, but I think this is a right step in the direction by informing coastal property owners of the issue of coastal erosion, the danger it poses on beach properties, and the Coastal Commission’s determination to protect beaches. I wonder if this will deter people from buying these coastal properties, eventually decreasing coastal development. I agree with the Commission’s decision to protect existing coastal structures and warn new coastal developments that they won’t be afforded the same luxury, because we all know better at this point and the environment, public beach-visitors, and economy won’t accommodate anymore for the ill-planning of coastal developers.

Miramar Beach deals with both issues of beach accessibility and coastal armoring of beach houses. These are examples of coastal issues that create conflict between private property owners and the public. Each side may feel passionate about their stance and protecting their rights. Private property owners have money and power on their side, while the public has the support of the California Coastal Commission, who not only fights for the well-being of California’s beaches, but fair access to them as well.