Moving to Carlsbad in high school gave me the opportunity to explore many beaches along the San Diego coast. The beach I spent the most time at is D Street which is a surf break just south of Moonlight beach in Encinitas. Due to the high volume of tourism, the Cottonwood Creek river deposit and the shrinking beach with subsequent cliffs, there has been a high level of erosion and popularity that requires beach development and monitoring.

Moonlight beach has the characteristic of a sandy beach deposit with large cliffs along the beach both north and south. With constant wave erosion, cliffs tend to erode, and sand is lost to the open ocean; however, the city and private homeowners mitigates this issue with winter sand preservation, dredging, and seawalls along the cliffs. In the summer time, Moonlight beach is a sandy beach tourist destination, but as winter comes all the sand is pushed up in large piles towards the back of the beach. This allows the sand to escape the erosion of the large winter waves and be stored for the small summer waves and tourism. The city has even dredged sand from the ocean to supply the beach with sand as the levels get too low. This is an expensive process that requires large equipment and city workers, so it is not done frequently. Private homeowners have also tried to fight erosion, but rather than sand, the cliffs. Expensive seawalls have been installed on 40 foot cliffs in order to protect the land on top of it. As it mitigates the problem currently, in the future it may not be enough to prevent the powerful ocean erosion.

When I had first visited this beach in 2011, it had not been developed much at that point. The beach consisted of a year-round lifeguard tower, a parking lot, old public restrooms, a man-made pipe system to guide the water from the creek to the ocean, a concrete walkway leading to the beach, and housing along the beach cliffs. However, in 2013, Moonlight beach underwent a complete development of the beach for tourism. There was a parking area with a garage underneath added near the lifeguard station used to park lifeguard vehicles and store equipment. Along with that, bathrooms, rinse-off showers, fire-pits, and a snack shack were all developed on the beach with a concrete pavement. This has increased the popularity of the beach and increased tourism for that specific area. 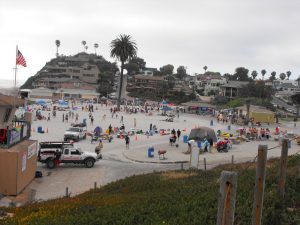 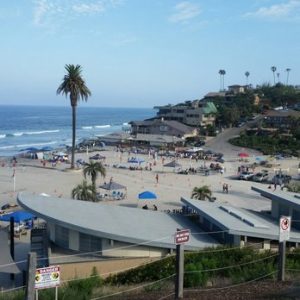 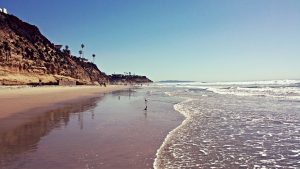