So for my final Beach visit I went to Point Dume in Malibu mainly because I didn’t want to pay for parking at Zuma beach. So first thing I noticed when I arrived was that there was very little kelp on the beach this i due to the extensive beach grooming that is done there and on Zuma. 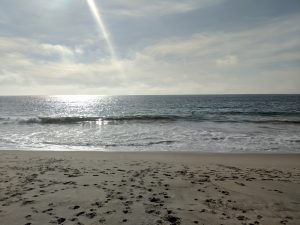 This easy to spot since above the water line you could see tire tracks all along the beach. But also the large absence of kelp too minus the small amount that were washed up on the beach recently. I also wanted to see what animals i could find there and most of what was there were seagulls and maybe one pelican that I saw fly over while I was there. I didn’t dig into the sand at the beach because I was not dressed properly but I can assume that since the beach is groomed often the only thing I would find would be sand crabs and no other invertebrates, like beach hoppers since I also saw no beach hoppers either. In the picture below you can see some seagulls that i took a picture of but also towards the right of the photo you can see the water line of high tide which I thought was interesting since there was a steep drop off from where the water actually was. 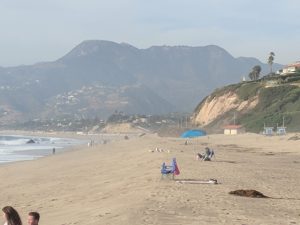 This made me think that in a matter of decades this beach might not be here anymore due to sea level rise, although right now it seems like it will not disappear since there was a considerable amount of sand on the beach even though I have no idea if they bring in sand to the beach for nourishment. Also while not int his picture if you looked toward Zuma you could also see all the structures that would be threatened by sea level rise in the future most of which would be under water. 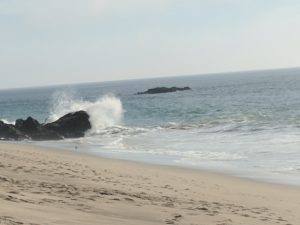 It was an interesting experience and i was lucky enough to get a nice photo like the one above. I just realized now but I also should have taken a photo of the rock face that people were climbing too which was cool since I had never been there before.