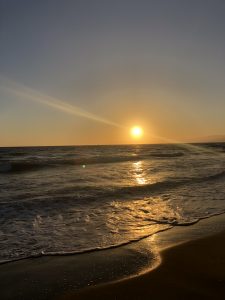 Spending an afternoon in one of California’s most populated beaches, Santa Monica is home to many tourist’s ideas of how a “California Beach” is supposed to look like. With the boardwalk inches away, the palm trees sitting behind the beach and the easy waves for a quick swim, this California beach is a perfect touristic getaway for our foreign friends. Unfortunately, due to the amount of tourism, the beach is overfilled with an abundance of plastic, trash and street sellers that leaves the beach worn out at the end of the day. Regardless of the amount of activity that occurs during the day, the beach’s view in the afternoon does not sell itself short. As the sun sets in the easy waves it makes for a magical date out before hitting the pier for a night of adventure on the rides. Because it is a touristic site this beach does go through grooming to keep the sand nice and even, the sand is also very fine and thin reflecting the easy access to walk through.

Although I did not get in the water myself it was easy to see that this beach was more of a beach to swim and have fun instead of a surfing beach. The waves were gentle just enough for one to get in and enjoy the tide, its long shoreline allowed for families to play in the water without worrying about the danger of getting dragged in along with the waves. Returning to Santa Monica reminded me of the first time I had enjoyed a day at the boardwalk and beach with my family when I was only sixteen years old. I live in Sonoma County which is six and a half hours away and the idea of Santa Monica and its famous boardwalk was only an idea in my head. Once arrived in this beautiful California getaway I realized just how much of the “Cali living” I was missing out in, living up north.

My family and I walked the boardwalk and the entire Santa Monica beach, five years later, returning on my own I realized just how much it has changed. The beach is still an angelic view for those of us who do not visit one as often, but aside from the stereotypical California aesthetics, it was enjoyable to see families out playing in the water with their children and begin a tradition of coming to the beach and jumping the waves as they hit the shoreline. Although it was not one of our most beautiful beaches it does provide a great example the Southern Calfornia culture.