Today after my finals I decided to check out Surfers point in Ventura, California a little after a week and a half since Thomas Fire started. 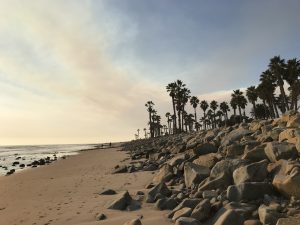 As I walk from the pier surfers point the hills in the back are chard. A thin layer of smoke and the marine layer clash over the water. The mix of fog and smoke made the oil rigs and the Channel Islands disappear. Seeing this was a surreal moment seeing how the fire acted the view of the beach. The fairgrounds had a lot of fire responder’s trucks and vehicles. Some of the first responders were relaxing on the beach eating, chatting on the phone, and some were even surfing. One apartment on the ground floor had a sign that offered their boards and wet-suits for any of the first responders that wanted to surf the waves which was nice of them. A couple of the first responders took up the offer. As I walked further along there a couple surfers, birds, and beach-goers enjoying the beach. The birds were sitting rocks near the shoreline just relaxing. 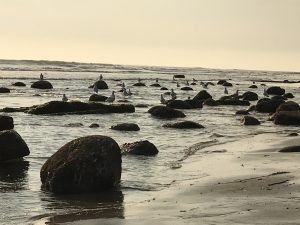 The beach has a pier with a fishing spot at the end of the pier. There are revetments along the beach and some seawalls that tries to protect the numerous housing along the each including apartments, and the hotels. Near the shoreline where most of the birds were relaxing there was a deteriorated tire and large pipe leading to the ocean. 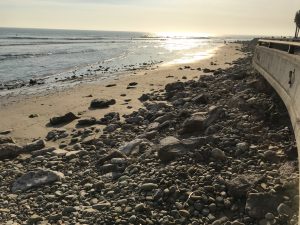 One thought on “Surfer’s Point”