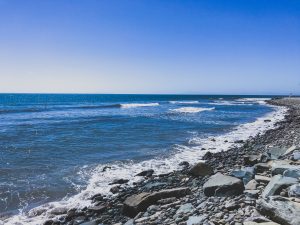 Along our California coast pacific storms create large ocean swells with damaging consequences, coastal erosion is a consistent threat to any structure build along this coast. The city of Ventura has learned from experience and is implementing innovative solutions with dealing with these issues. Down at the Ventura Pier and Promenade off of Ventura’s California St, the beach is sandy but very quickly the west end of the beach just north of the Pier, is entirely made up of large pebbles. Though these large pebbles were not brought here by some natural force, they were placed on the beach, along with geotextiles and concrete seawalls to protect our coastal structures. As you walk along the concrete path heading north you quickly notice the sandy beach almost completely disappear, a bit further down the path the signs and extent of erosion are even more prevalent. Large pieces of the existing concrete path have fallen into the ocean, exposed underlaying geotextiles are now slowly ripped away contributing to micro plastic pollution, and any remnants of the once sandy beach are nowhere to be found. Several years of doing the same thing over again, of consistently rebuilding the damage caused by coastal erosion has the city of Ventura looking for better more sustained solutions to the problem. The Surfer’s Point managed retreat project proposes that the bike path and parking lot be pushed back further away from the beach. This would restore the natural buffer zone along the coast, the fairgrounds property would be protected and the new parking lot will treat and filter storm water resulting in increased water quality and a more natural beach. On top of what was the parking lot and bike path, is a layer of cobble stones covered with sand with dunes and vegetation on top of that. These dunes stabilize the beach and restore a more natural beach. This type of project is really the first of it’s kind, moving away from building harden structures, it protects public access to the beach and accommodates rising seas. This being the most heavily used public space in Ventura, the economic value of a vibrate beach is very important to the city. 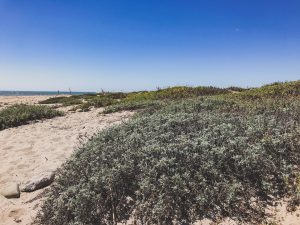 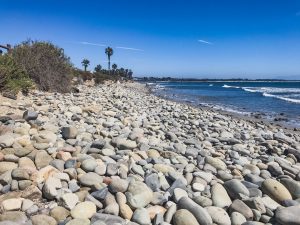