Yesterday I was fortunate enough to start my day surrounded by local natural beauty that I seldom take advantage of seeking out. I was on a traffic free and very scenic stretch of Pacific Coast Highway, en route to a uniquely picturesque Southern California Beach. El Matador State Beach was my destination, but I was bombarded by striking costal views throughout my drive. I was headed to this local gem in order to observe and asses the biodiversity of the beach with my Conservation Biology class. I took the below picture only a few steps from the parking lot, which sits perched at the summit of this cliffside. 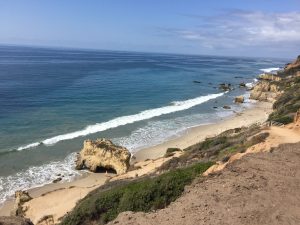 Our mission involved taking a multitude samples of sand from as many differing areas of the beach as we could in order to survey them for small infauna that was visible to the naked eye. Although all of the data has not been processed yet, the seemingly low numbers of species richness and diversity in the samples I helped to collect appeared to indicate a somewhat diminished biodiversity. This impression will hopefully be broken and improved once all data is in and properly analyzed. I was encouraged, however, to find rocks further down the beach who sat right in the break of the surf that were heavily colonized by several aquatic creatures like muscles and anemones. It may be that the low amount of wrack is prohibitive to the density of organisms, as kelp and sea grasses offer a great deal of the beach’s overall nutrition. Most of the beach enjoyed about 100 to 200 feet of width which can likely be attributed to the adjacent cliffs. Having their weathered sediment constantly flow down to the shore is vital to maintaining this favorable width. Pictured below are some of the class taking samples . 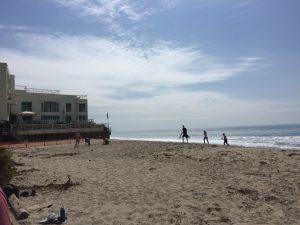 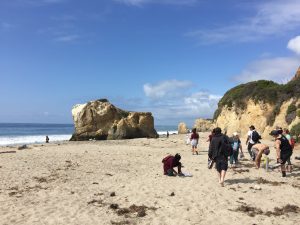 In addition to being a functioning ecosystem, this beach is probably more widely appreciated for its rocky views. Nary a visitor could resist the urge to get pictures of the waves splashing through their previously bored tunnels. From the casual beachgoer with their phone’s camera to professional photo shoots with lights and make-up artists and small entourages. 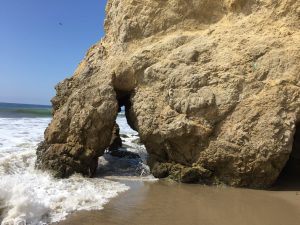 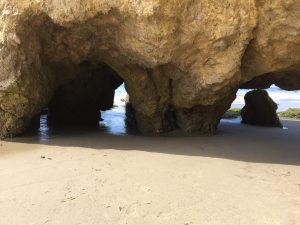 Although I intentionally neglected photos of the beachgoers themselves, the dry sand was not full of people but was definitely in demand, especially for being a weekday morning. It seems to be a very popular destination for locals and tourists alike. The protection provided by its State recognition allows this beach to remain so beautiful and continue to attract these adoring patrons. That being said, it is a relatively small stretch of sand that is surrounded by residential development. These houses are surely not long for this rapidly changing  world and may ultimately become litter cluttering the waves of this majestic beach. Perhaps that dark reality will be the only evidence powerful enough to initiate different attitudes about building at such proximity to beaches… But I wouldn’t mind spending the weekend in one!