Usually when you plan your beach trip, you would grab the beach essentials so you can maximize the level of comfort for you at the beach. A towel, blanket, sunscreen, snacks, water; what I call the essential. The beach is a place to invite friend to go throw a football hang out play in the sand…. That is of course if there is sand. But if there isn’t sand then what do you do?  Is a beach even considered a beach without sand? Well thats complicated… but why would anyone label a beach, a “beach”,  if it doesn’t have any sand? Well there is a beach that really makes you ask these questions. A “beach” that is not to far away from us, that has no sand and is ironically named… “Broad Beach.”

The beach is anything but broad. For most of the year the water at broad beach covers the entire beach, up to the “sea-wall” that was put into place in the last 10 years to protect the houses from flooding. On occasion, sometimes in the year, when the tide is low, you might be lucky to walk on this beach and touch “dry” sand, but I would be careful to put your towel and belongings down for the the tide may just decide to rise suddenly washing everything you own away. So why call it broad beach? Well broad beach about 20 years ago used to fit the name given and was “broad”,  with public access and towels drawn out all along the shore. People would run up and down and have all the entertainment that a huge beach would provide. However this is not the case for the beach today as it has become a victim to the warming planet and sea-level rise. 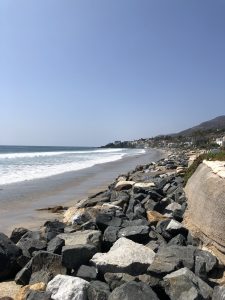 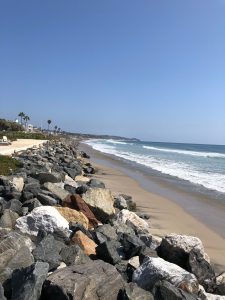 Broad beach is one of the first beaches in California to be taken out by sea-level rise. Although the California sea level rise in California isn’t causing a huge news cycle or isn’t causing “crazy” flooding or taking out cities it has been super destructive to beach habitats and threatens the homes that reside on shore. Case and point is broad beach. If you go there today you will be treated by a giant seawall along the shore in front of every home (see photos).  You would never imagine that this beach had dry sand that stretch all across and that before, the water was no where near the houses. For reference check out the neighboring beach of Zuma, in Malibu, (below). A beach that if any one has been through has vast amount of room.

Broad beach has been one of the Californian coast case example of modern day sea level rise and there are many debates today on what the city of Malibu should do to help mitigate the rise in sea level. For now all they can do is wait and see the beach that was once broach become covered with water.. and If you don’t believe me you should go check it out your self. It is about 30 minutes away from CSU Channel Island campus going south on the PCH. Might be hard to get to being that there are a bunch of homes in the way and given that there is a massive wall keeping the water and the public “off the sand”. But when you do find the small entrance (see below), go out and try to enjoy the beach. Its really shocking. However, I don’t recommend making a big day out of it, your stuff might get wet! 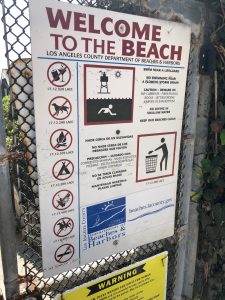 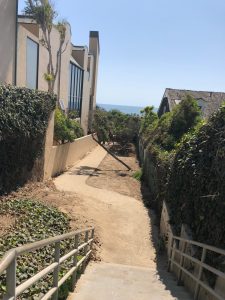