Growing up in Mukilteo, WA, it gave me the opportunity to explore the Washington Coast. There are many popular beaches like La Push and Greyland; however, we consistently went to a little beach town named Westport. This town was small with only a little over 2,000 residents and much unlike beaches in California. The surf culture was still there, but it is completely different when compared to southern California beach culture. This is because the water is typically 50 degrees and under and the surf is typically blown out and heavy. The beaches are extremely wide with san dunes at the entrances and sandy beaches littered with driftwood. This is where I learned to surf and I remember as a kid hating it because the water was so cold and the surf was so powerful to me. Westport has a huge jetty at the main beach that created a nice break off of the jetty and a rip-current along the jetty making for an easier paddle out.  When surfing at Westport, you typically only saw a couple other guys out in the surf unlike the endless crowds in southern California. You would think that there would be no local claims to the surf, but the few locals in this ran down town laid a huge claim on the surf and would challenge any non-local in the water. I believe this is due to the lower income living on the coast of Washington and the harsher living conditions. Westport has some of the best surf in Washington, but on the other side of the jetty is a huge fishing marina. Unlike California, one could walk on the docks and buy some of the freshest seafood you could get.  With large amounts of wetlands surrounding the area, there were many oyster and clam farms. It is known as the center fishing, shellfish farming, and seafood processing along the Washington Coast. Even though it does not have great weather, Westport draws a considerable amount of tourism from surfing adventurists and seafood lovers. More recently, Westport has even ramped up their tourist industry and provided sources for people to use to learn  about Westport and its attractions. Overall, Westport is a quiet town that provides refuge to the driven surfers and fishermen. 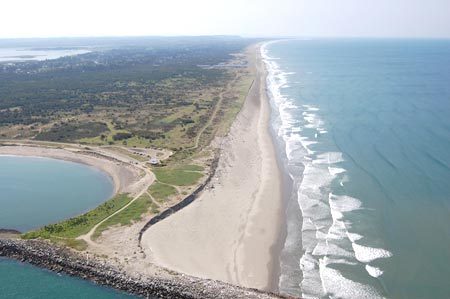