The beach that I visited was Will Rogers State Beach. I chose this particular placed because I wanted to visit a beach that was different from what I typically considered a beach. Will Rogers State Beach is about 5 minutes from the extremely popular and tourist packed Santa Monica Pier. This area along the coast especially brings a variety of tourist looking to enjoy a gem of California’s coastline. It was not the typical sandy beach but instead, it was a beach that has been armored by the city. The coast that was between Will Rogers State Beach and Santa Monica Pier was dotted with nets and immaculately groomed sand.  As I passed by, it occurred to be how popular this area was for more recreational actives like volleyball, kite flying, and frisbee. As I drove further down the coast, it was the first time I really noticed the large boulders that held the coast up. I never noticed or even understood the difficulty this area had keeping its sand on shore. This area is experiencing intense coastal erosion which is the depletion of the shoreline. Essentially, the beach is being washed away before our very eyes. After years of driving down this same exact road, I never gave much thought to the significance of the large stones pressed into the coast. I realized that hidden under those rocks is the complicated process of erosion and sediment loss that is reshaping our shorelines.

These rocked are placed against the roads in a desperate attempt to sustain our coast yet this technique does not address the core problem that lead to this level of coastal erosion.  The area is surrounded by businesses and what I imagine to be million-dollar homes and the costal armoring is there to protect the infrastructure that have paid handsomely to be built along the coast. Erosion inland helps move sediment from watersheds and streams down to coastal regions. Other factors that can contribute to erosion include wind,rain and human activities. There are also many human activities also contribute to the disappearance of our shorelines. Things like adding more sand to a specific beach from another area, which is also known as nourishment, effects the coast by unnaturally supplementing sand where it isn’t and in the long run the stand is washed the coast by wind and waves. I recalled in lecture that there are seasonal changes to our beaches, Dr. Steele explained that late summer offers lower tides which exposes more sand, which contrasts with the first couple months of the year that shows increased water levels. Southern California beaches undergo dramatic seasonal change due to a shift in temperature and wave strength I wondered if what I saw would be considered low or high-water levels. Generally, winter waves drag the sand offshore exposing the sediment that is found underneath the sand and in contrast; summer waves push the sand onto the shore helping to replenish the sand and rebuild the coast. As I looked down the coast with this new knowledge and perspective, I started to understand why it was so important to consider every action that we make. Seemingly simple things like blocking off a small stream may have adverse consequences. Prior to this course, I never noticed or thought about the effects that changing a single ecosystem can have on an environment. Noticing rocks where sand should be never seemed out of place but now I wonder what this beach would have looked like 100 years ago and what it will look like in the future. 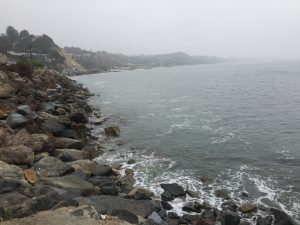 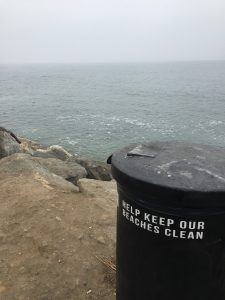 4 thoughts on “Will Rogers State Beach”