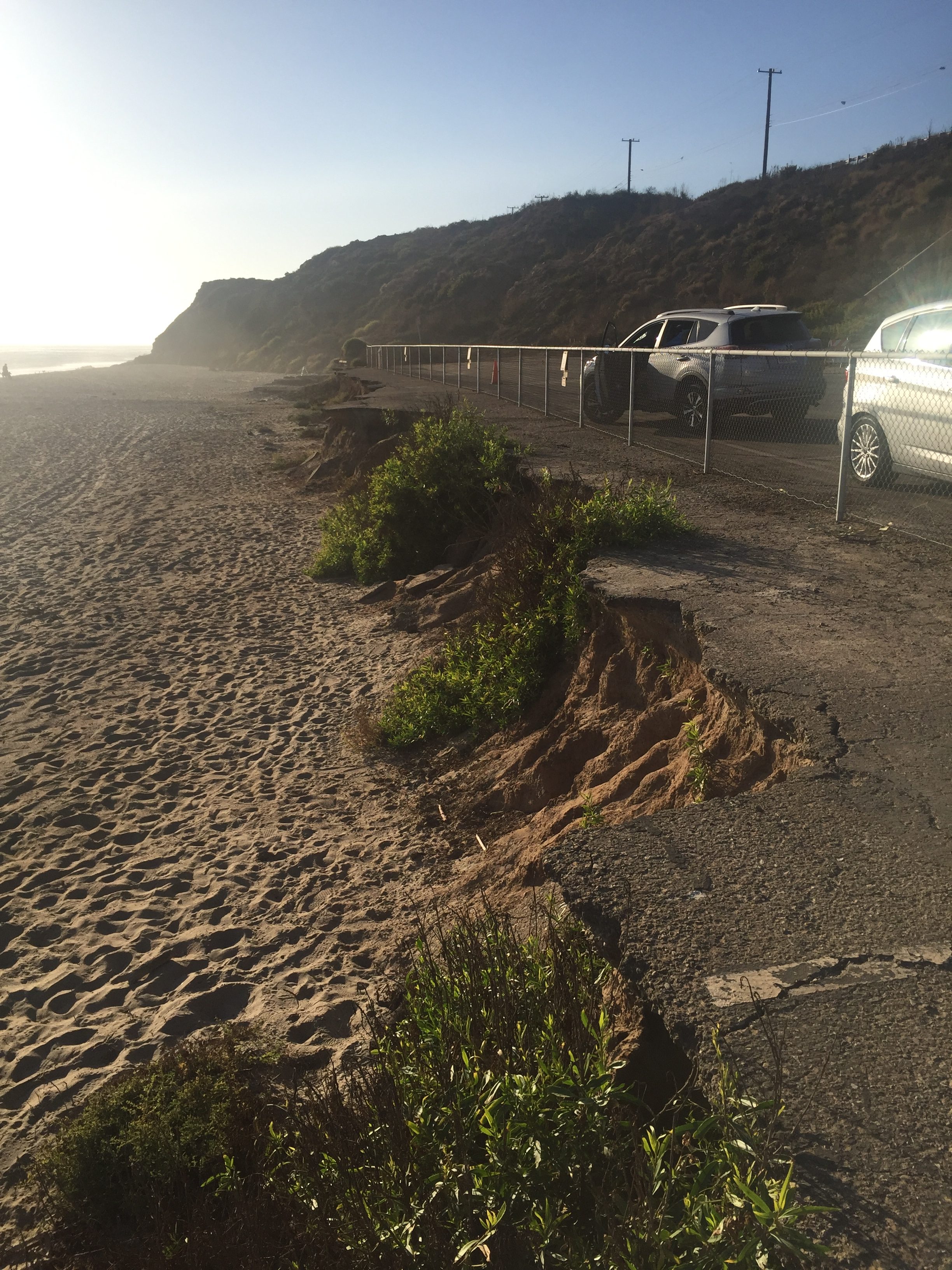 This beach is known as Heavens, just 1-minute north of Leo Carrillo on PCH in Malibu. It is one of my absolute favorite beaches to surf because of what it offers. To get to this beach, you go in through the gates of Leo Carrillo, drive straight through a tunnel under the highway and you will come out onto rather narrow parking lot. An important part of this beach is the parking lot. In the event of El Niño in 2016, because of the heavy rain fall and increased temperature in ocean water, this caused aggressive king tides to constantly hit and erode the parking lot supported by sand and dirt. As seen in the photo, it is clear to see the after math of the repetitive beating of extreme high tides and erosion, causing the concrete to fall apart. Part of the parking lot is broken off but still functional. To protect any objects or people from possible injuries of this small cliff, fencing has been put in place for the safety of others. Just recently over this summer, many improvements have been done to this lot and has been the busiest with many beach goers this summer I have seen in a long time. New parking lines have been painted and there is currently a structure being built to function as restrooms and showers. This is a rather popular spot where many bring their canopies and barbeques and have a good time

Lastly, moving on to why this is probably one of the best places to surf in Malibu. Heavens is a rather secluded beach because it is located down a hill that is not visible from PCH, so not an abundant amount of people know how to get here. For this reason, on days when the surf is good to fair or really good, it serves as one of the top spots to surf. Other beaches such as Zuma, Nicholas Canyon Beach (Zeros), or Countyline will be extremely crowded with surfers and beach goers. Unlike the beaches just stated, the wave at Heavens does not break throughout the whole beach. The main break is at the far end of the beach where the rocks are. Though the waves may not always be as consistent as the other popular beaches, it still always beats the struggle for fighting for waves in a big crowd. The only problem is that when the tide is 4.0ft of higher, it is not really surfable unless the waves are at least 6tf or higher. Overall, I would say Heavens is in the top 3 beach in Malibu in terms of surf and regular beach goers.