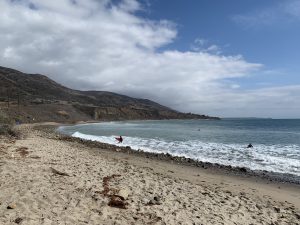 Leo Carrillo State Beach upholds the theme that Malibu is a destination spot for endless summer. Despite heavy rains the day prior, Leo Carrillo was overflowing with surfers, beachgoers, campers, hikers, and naturalists. Leo Carrillo is a destination spot for individuals that crave summertime. During my visit, there were close to twenty surfers engaged in their riding, despite the narrow shoreline. At the shore, some surfers were discussing best practices and the necessity of a board leash with some new surfers about to enter the water. The shoreline was split between sand to the south and moderately sized rocks to the north illustrating the need for the surfers to be skillful in determining how they would ride in the shore breaks. The surfers were not alone in their beach enjoyment; the narrow beach was covered in beachgoers appreciating the lingering summer air. The shore provides an intriguing area to watch wave refraction due to the bend in coastline that happens toward the southern edge of the beach. A birthday party enveloped almost the entire northern end of the beach, causing the shore to be further limited for those wanting to lay out and relax. 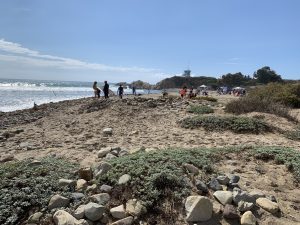 There does not seem to be an off-season for Leo Carrillo State Beach, either. The tides during this winter season are notably low, which is peak tidepool season. This creates more allure to drive people toward the beach during a season that would not be considered traditional summer. The tidepools draw in a naturalist’s curiosity for the species that exist in these tidepools. I was educated on sea star wasting disease which began plaguing the sea star population at Leo Carrillo in 2013. Sea star wasting deteriorates muscle tissue in sea stars, which causes fatalities to these populations. Employees, scientists, and naturalists are holding onto hope that the sea star population begins to recover this year, five years after the event started. Low-tides during December should see large crowds as well, hoping to spot tidepool population successes. 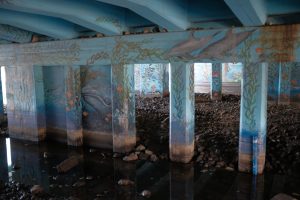 The geography of Leo Carrillo State Beach is in an excellent spot for beach-hopping. Several other beaches outline the iconic Pacific Coast Highway in Malibu, like El Pescador State Beach, Nicholas Canyon Beach, and El Matador State Beach. Neptune’s Net is popular hangout for bikers and beachgoers riding along the coast and is located just a few minutes away from Leo Carrillo. Leo Carrillo State Beach is a great central hub for those intrigued by the culture of Malibu and its laid-back imaginary. The campsite allows for an easy point of access to the Malibu coast to both locals and tourists to take part in recalling favorite scenes from classic Hollywood movies. Movies like Grease, Gidget, and Karate Kid feature Leo Carrillo State Park as a location. Leo Carrillo State Beach provides the perfect epicenter for any individual that wants to experience quintessential Malibu culture. 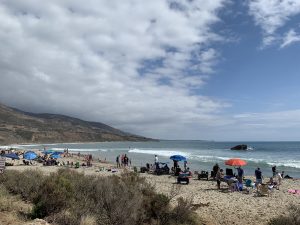 This is a time-lapse video shot of surfers enjoying the surf.