After the lecture about coastal engineering I was very curious to see how the managed retreat of surfer’s point was doing today. I drove as far as possible behind the Ventura County fair grounds and parked in a small parking lot. This parking lot marks the beginning of the dune area that was created as part of the managed retreat. On the north side of the parking lot you can still find areas that were damaged by the storm that made the managed retreat project necessary. 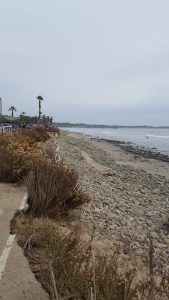 As I left the parking lot to walk down the boardwalk behind the dunes the first thing I noticed was how many people were there enjoying the beach and dunes. There were people on bikes, running, and (like me) walking with strollers. One aspect of this beach that I really liked was the mixture between nature conservation and public use of the space. There were areas of the dunes roped off for plants and animals as well as areas for the public to walk between the beach and the boardwalk. In one area was a beautiful raised wooden platform that twists through the dunes. Near this platform was a sign commemorating the managed retreat project and its supporters. 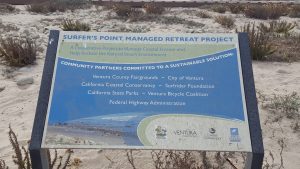 My son really liked playing on the platform. There was no one running or biking there, so he could explore more than he could on the boardwalk. The wind had also blown some sand onto the platform for him to play in. 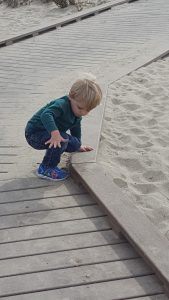 Out in the water you could see all the surfers lined up ready to catch a wave. There were more surfers in this spot that I have ever seen anywhere else, but I am not a surfer so that is not saying much. The beach in front of the dunes was rocky and I am not sure if using rock to stabilize the beach was part of the managed retreat or not. There was enough space between the rock and the surf break to stroll down the beach but not enough to lay out a blanket and relax. 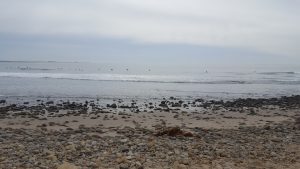 Over all I think the managed retreat was a success and the dune area that was created is a great example of how people and nature can coexist. All the information I say said that what was done so far was phase 1 of the project but nothing I could find said when phase 2 is supposed to start. 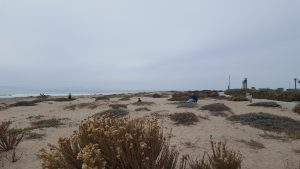 One thought on “Surfers Point”